Aikido is a modern Japanese martial art developed by Morihei Ueshiba as a synthesis of his martial studies, philosophy, and religious beliefs. Aikido is often translated as "the Way of unifying (with) life energy" or as "the Way of harmonious spirit."

Ueshiba's goal was to create an art that practitioners could use to defend themselves while also protecting their attacker from injury.
Aikido is performed by blending with the motion of the attacker and redirecting the force of the attack rather than opposing it head-on. The aikidōka (aikido practitioner) "leads" the attacker's momentum using entering and turning movements. The techniques are completed with various throws or joint locks. Aikido can be categorized under the general umbrella of grappling arts.
Aikido derives mainly from the martial art of Daitō-ryū Aiki-jūjutsu, but began to diverge from it in the late 1920s, partly due to Ueshiba's involvement with the Ōmoto-kyō religion. Ueshiba's early students' documents bear the term aiki-jūjutsu. Many of Ueshiba's senior students have different approaches to aikido, depending on when they studied with him. Today aikido is found all over the world in a number of styles, with broad ranges of interpretation and emphasis. However, they all share techniques learned from Ueshiba and most have concern for the well-being of the attacker. This attitude has been the at core of criticisms of aikido and related arts.
The Meaning of the word Aikido
The word Aikido in Japanese is made up of three characters or kanji. The first and most important is AI which means "to meet, come together and harmonise". The second kanji is KI which means "the spirit (of the universe) or soul". The third kanji is DO which means "the way or path", as in Ken-do or Ju-do; to signify that the study of Aikido does not only involve self defence techniques but includes positive character-building ideals which a person can incorporate into his or her daily life.

The word "aikido" is formed of three kanji:

The term dō connects the practice of aikido with the philosophical concept of Tao, which can be found in martial arts such as judo and kendo, and in more peaceful arts such as Japanese calligraphy (shodō), flower arranging (kadō) and tea ceremony (chadō or sadō). The term aiki refers to the martial arts principle or tactic of blending with an attacker's movements for the purpose of controlling their actions with minimal effort.One applies aiki by understanding the rhythm and intent of the attacker to find the optimal position and timing to apply a counter-technique.
Historically, aiki was mastered for the purpose of killing; however in aikido one seeks to control an aggressor without causing harm. The founder of aikido declared: "To control aggression without inflicting injury is the Art of Peace." A number of aikido practitioners interpret aikido metaphorically, seeing parallels between aikido techniques and other methods for conflict resolution. These kanji are identical to the Korean versions of the characters that form the word hapkido, a Korean martial art. Although there are no known direct connections between the two arts, it is suspected that the founders of both arts trained in Daitō-ryū Aiki-jūjutsu.
source: wikipedia 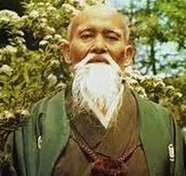